The “Hammou-Boutelilis” Sports Palace in Oran should be the first to be ready among the other seven sports infrastructures that are being renovated and upgraded in the frame of the Mediterranean Games of 2022 in Oran.

Almost all the works have been completed, including the removable covering of the floor depending on the sports of handball, basketball, volleyball and badminton, “something which is a novelty in sports halls in Algeria”, said the director of the Sports Palace, Sid Ahmed Tab.

The stands of the sports hall are also benefited from brand new seats. No less than 4,200 seats have already been placed and the rest 800 seats are in the process of being transported from abroad. “The installation of 37 surveillance cameras is also remaining, as well as the renovation of the lighting network and the installation of an air conditioning system”, added the person in charge of this structure.

With a capacity of 5,000 seats, this sports hall, equipped with a medical center of 30 rooms, is scheduled to host basketball matches during the 19th edition of the Mediterranean games scheduled from June 25 to July 5 2022.

Oran is also preparing to receive a large-scale sports complex comprising among other things, a 40,000 seated football stadium, a 6,000 seated sports hall, a nautical complex containing two Olympic swimming pools and a third pool of the half distance as well as a stadium for athletics with 4,200 seats. 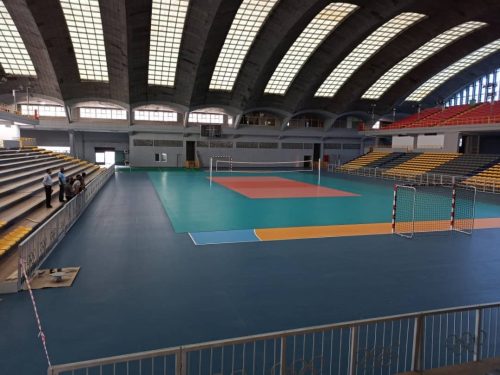