Creation of the Mediterranean Gymnastics Confederation 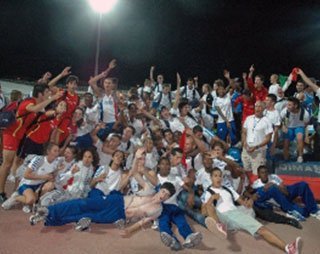 TUNIS, 7 August 2010 (TAP) – Mr. Samir Laabidi, Minister of Youth, Sports and Physical education, received on Sunday morning in the headquarters of his organisation Mr. Amar Addadi, President of the International Committee of Mediterranean Games, who was visiting Tunisia for the occasion of the 8th Mediterranean Athletics meeting, to which participate 350 athletes representing eight Mediterranean countries.

The discussion focused, among others, on the possibility to create, within the following months, a Mediterranean Athletics Federation based on an initiative of the Tunisian federation, aiming at developing Athletics in the Mediterranean generally and in Tunisia in particular. Mr. Laabidi stressed also the importance of the Mediterranean Athletics meeting as an opportunity to test the physical condition of the Tunisian athletes who are preparing in order to take part in the Youth Olympics that will take place from 14 to 26 August in Singapore.

Mr. Amar Addadi, from his side, welcomed the efforts of the Tunisian Athletics Federation to boost the cooperation between the Arab and foreign federations, declaring his support to the proposition regarding the creation of a Mediterranean Athletics Federation. The ICMG President also expressed his satisfaction with the honourable results of the Tunisian sport on a regional and international scale, as well as with the quality of the sports infrastructure in Tunisia, driven by the president Zine El Abidine Ben Ali.

The two parties agreed to ensure the monitoring of the procedures of creation of this new structure, declaring their determination to reinforce the technical cooperation, adapt the new technologies to the sports activities and organize joint training and refresher sessions between the Athletics federations of the Mediterranean countries.