The ICMG President welcomes the Tunisian approach on youth and sport

Distinction for the ICMG Secretary General 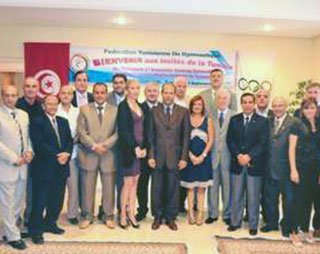 On September 18 and 19 took place in Tunis the works of the extraordinary constitutive General Assembly of the Mediterranean Gymnastics Confederation.

The meeting was attended by 15 Mediterranean countries out of the 24 countries-members of the FIG. These are as follows: Morocco, Tunisia, Libya, Egypt, Lebanon, Spain, France, Italy, San Marino, Malta, Slovenia, Serbia, Greece, Albania and Turkey.

The General Assembly studied and approved unanimously the statutes of this new Confederation, and elected its first Executive Committee, composed of the following members:

At the beginning and at the end of the sessions of this General Assembly, the President of the International Committee of Mediterranean Games, Mr. Amar Addadi, addressed messages of support and congratulations to the delegates.