The ICMG President welcomes the Tunisian approach on youth and sport 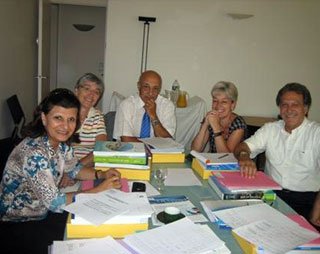 Under the Presidency of M. Amar Addadi, the Evaluation Commission, composed of the General Souhail KHOURY, President, Mrs Nour El-Houda KARFOUL and Ms Dominique PETIT, members, Ms Sophie METAIS, assistant, held a meeting in Paris on 5 July 2010. M. Tullio PARATORE, also member of the commission, was not able to make the trip, held back due to an unexpected obligation.

The commission, after having ascertained that the 5 candidature files for the organisation of the 2017 MG, Alexandria (EGY), Mersin (TUR), Rijeka (CRO), Tarragona (ESP) and Tripoli (LBA) were all received within the set deadline, heard the recommendations of the ICMG President regarding the nature of their mission, as well as the principles and values that the ICMG must preserve for the forthcoming MG editions.

The commission fixed the calendar of visits that to be proposed to the candidate cities, which will spread out between the 3rd week of September 2010 and the 1st week of January 2011.

It is to be reminded that the report of the evaluation commission will have to be written and presented to the Executive Committee members in March 2011, before its distribution at the beginning of April to the ICMG General Assembly members, who will select the host city during the June 2011 session.