The Beach Handball field of the Mediterranean Beach Games is ready

The Deputy Sports Minister, Lefteris Avgenakis received from the Secretary General of the International Committee of Mediterranean Games Iakovos Filippousis, the official invitation of the 2nd Mediterranean Beach Games that will be held in Patras from the 25th until the 31st of August.

The Deputy Sports Minister confirmed to Mr Filippousis his presence at the Opening Ceremony of the Mediterranean Beach Games, in which he will represent the Hellenic government, as well as his intention to watch the efforts of the Mediterranean athletes. Responding to ICMG President Amar Andadi’s invitation he will also deliver the opening speech at the General Assembly on August 24 in Patras. 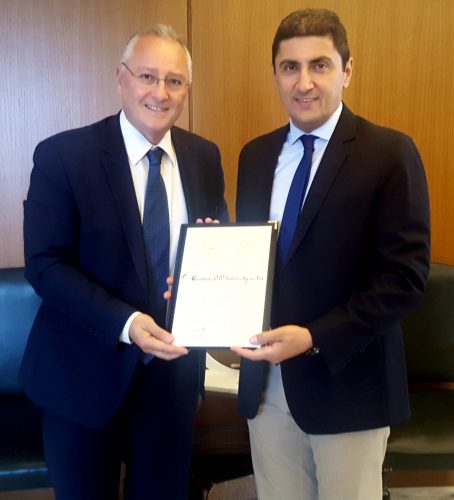 Mr. Avgenakis has already visited the Organizing Committee in Patras, sending a clear message that he is fully supporting the organizing of the Mediterranean Beach Games.