Meeting in Athens for the Mediterranean Beach Games “Heraklion 2023”

Τhe Deputy Minister of Culture and Sports of Greece Mr. Eleftherios Avgenakis, the President of the Organizing Committee of the 3rd Mediterranean Beach Games “Heraklion 2023” Mr. Nikos Dabakakis and the Executive Director Mr. Nikos Provias had a meeting in Athens with the ICMG President Davide Tizzano and the Secretary General Iakovos Filippousis. 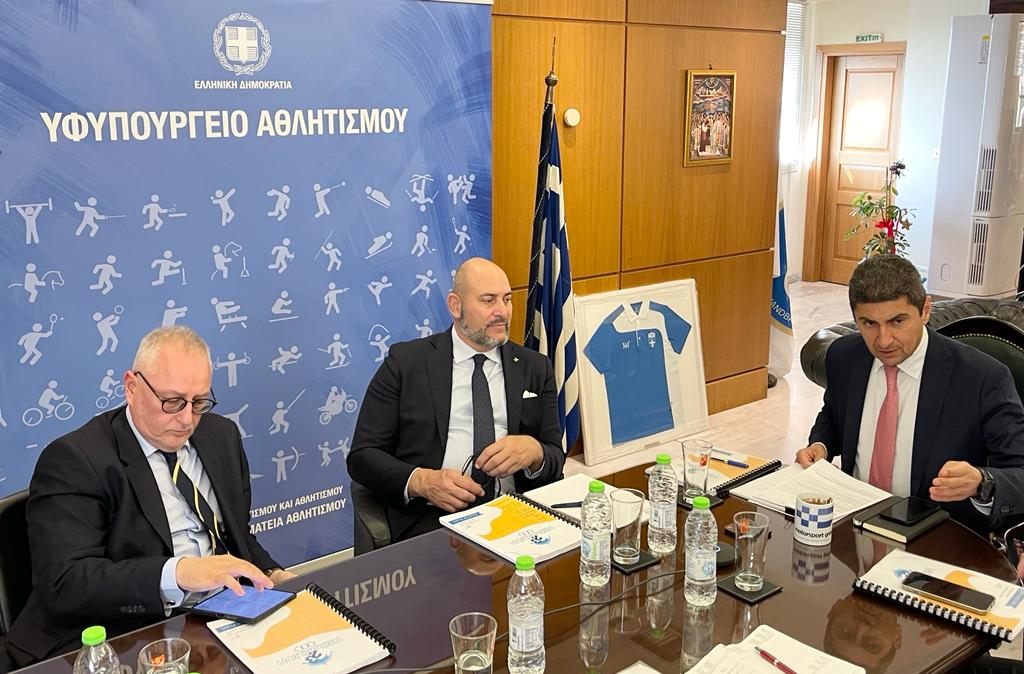 During the 90-minute meeting were discussed, the immediate priorities of the preparation of the great sports festival of the Mediterranean countries, which will be hosted in September 2023 in Crete, given that there are 9 months left until the Opening Ceremony. “Our aim is the Heraklion games to be the best in the history of the Mediterranean Beach Games. We have confidence in the organizational effort and ICMG will contribute with its experience to this purpose” said the ICMG President in the beginning of his speech.

Τhe Greek Deputy Minister of Culture and Sports assured Mr. Tizzano that “the State has ensured every necessary condition for the success of the Games, with the facilities at the Karteros Beach Sports Center as the key point.”

The President of the Hellenic Olympic Committee underlined the excellent cooperation of the Organizing Committee of the 3rd Mediterranean Beach Games “Heraklion 2023” with ICMG, saying that “the common goal is the successful organization of the Games, even though their preparation takes place during a difficult economic situation. We will all succeed together.”

The “Heraklion 2023” Organizing Committee has already submitted to the ICMG the Master Plan of the Games, which will be discussed in the upcoming meeting of the Executive Committee and in view of the upcoming visit of the Coordination Committee to Heraklion, at the beginning of 2023.

The 3rd Mediterranean Beach Games “Heraklion 2023” will be held next September in Heraklion, Crete, with the participation of athletes from the 26 countries – members of the ICMG.