The Prime-Minister of Greece attendend the games of Davis Cup

An exhibition to celebrate one year to go to Tokyo 2020 was inaugurated in Matera, Italy on 24 July. The Southern Italian city, which the EU named the 2019 European Capital of Culture, hosted the “Road to Tokyo” from 24 July-11 August.
One of the three exhibition areas was dedicated to Olympic torches, which were provided by the Italian National
Olympic Committee. All the torches of the Summer Olympics, from Berlin 1936 onwards, as well as those of the Italian winter Olympics Cortina 1956 and Torino 2006 were exhibited. 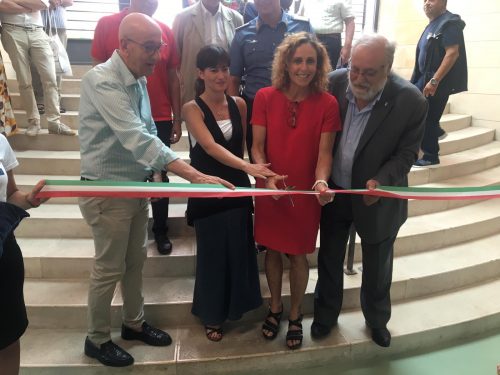 In a Japanese exhibit, visitors had the chance to measure up to some of the equipment that will be used at Tokyo 2020, ncluding the height of the Olympic diving platform (10 metres), the basketball hoop (3.05 metres) and the volleyball net (2.60 metres).
Paralympic sports equipment was also made available to all visitors, who had the opportunity to take selfies with the
Olympic and Paralympic Games mascots, with the huge Olympic Stadium in Tokyo serving as a backdrop.