The Press Conference for the II Mediterranean Beach Games “Patras 2019”

The programme of ICMG General Assembly

A Press Conference on the II Mediterranean Beach Games, to take place in Patras between August 25th and 31st, was held in Athens by the Games Organizing Committee. The Conference was honored by the presence of Mr. Lefteris Avgenakis, Greek Deputy Minister of Sports, and Mr. Iakovos Filippousis, Secretary General of the International Committee of Mediterranean Games (ICMG).

Greece’s “national bet” to the Games’ success, as the country places itself again on the European and world map as a host to large-scale sport events; the multiple benefits for the region of Achaia, Western Greece and the country as a whole; the importance of the presence of 26 countries from three continents with more than 700 athletes, about as many foreign delegation executives, 1,200 volunteers, VIP guests (among which Prince Albert of Monaco) and the heritage to be left for the city when lights go off.

“The II Mediterranean Beach Games are a challenging bet, and their success, in spite of the various problems that we have inherited, already is and will be a fact. Backed by the tireless efforts of the Organizing Committee and everyone involved in the Games, and against merciless time, the project for which we are thankful to the ICMG for trusting us to implement starts next Sunday.  This trust may have been jeopardized along the way, but in the end we are certain that everyone will be smiling at the time of the Closing Ceremony.country. It is my duty to publicly congratulate the Organizing Committee that undertook the implementation of this difficult project, and although they had not officially assumed their duties through a state decree, they kept working without pay without losing pace at any moment, because they believe in this event. Because all of them, employees, volunteers, and executives are servants to the ideals of volunteerism and sport, that is why we all thank them from the bottom of our heart.

I would like to reassure every citizen that his or her participation in this sporting feast will decisively contribute to its success, while support of any kind from local bodies is something the Games cannot do without. Our government, and myself in particular, as responsible for Sports in Greece, will attend the Games during all those days, in order to watch them, enjoy them, and provide solutions to any problems that could arise – although I do not think there will be any.

The quintessential message of the Games, after everything that has come up before they reached this stage, is that we are proud of our country, and that united we can achieve success, leaving Greece of the past and everything it included behind, and advancing to Greece of the future with hope and optimism.” 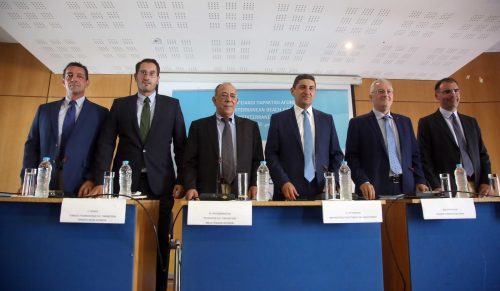 Then the podium was taken by ICMG Secretary General Mr. Iakovos Filippousis, who said in his speech:

“It is a pleasure for the International Committee of Mediterranean Games to see the Games return to Greece after 28 years, since Greece is one of the ICMG’s founding members. It is also quite important that Greece is back on the map of countries able to organize large-scale intercontinental sport events, and we are certain that our country will continue its long tradition to successfully organize such events in an excellent way.

The II Mediterranean Beach Games have broken every participation record, as far as athletes, judges, and visitors are concerned. However, the most important thing for us is that all 26 Mediterranean countries will participate. The Games will be broadcast by many foreign channels in cooperation with Greek state TV, and also in full by the Olympic Channel, a fact that, considering the popularity of modern digital media, will promote the Games as well as the city itself.

It is with great joy that we will welcome in Patras Chiefs of State, such as Prince Albert of Monaco who will attend the Opening Ceremony, and also Prime Ministers, former Prime Ministers, members of the International Olympic Committee, and in general people who will honor Patras with their visit.”

Mr. Nikos Papadimatos, President of the “Patras 2019” Organizing Committee, said in his speech:

“At this moment all infrastructure work is in the final stage. The venues where the Games will be held are located in three places within the city of Patras. The main place is around the “NOP” swimming pool, where you can find most facilities for the Games. A second place is the area we Patras citizens call the “Plage”. A third is the “A. Pepanos” indoor swimming pool, while the Water Skiing competition is going to take place at Lake Stratos in Agrinio.

This whole effort, as tiresome as it was, has finally led to the conclusion that the bet had been won and the Games could go on. So we are going forward in faith, putting down the last details, giving solutions to the last problems, and I believe that starting with the Opening Ceremony and all the way to the Closing Ceremony, the Games will be crowned by success for our city, which due to its history needs to be given a positive note for their organization. Our homeland will benefit very much if people that will visit it on this occasion give it a round of applause to say “thank you”.