Oran 2021 unveiled the logo and the mascot

The logo and the mascot of the 19th edition of the Mediterranean Games in Oran and they represent the visual identity of the Games, were unveiled during a ceremony organized in algerian city in the presence of the ICMG delegation with the President Amar Addadi.

The Minister of Communication and spokesman of the Government Mr. Rebhi and the Minister of Youth and Sports, Mr. Bernaoui, as well as the local authorities were present in the ceremony which characterized from the Director General of “Oran 2021” Salim Iles, as “a new step taken” in the process of preparations for this sporting event that Algeria is hosting for the second time in its history after the 1975 edition in Algiers.

“In 1975, Algiers was very high in the Mediterranean sky. 44 years later, I have the great honor and the responsibility to lead the organization of this important sporting event, “he said.

In addition, Salim Iles noticed that the transition to this new stage, consisting of the establishment of the visual identity of the games “will allow our society to live fully the Mediterranean Games Oran 2021 and strengthen the promotion of dialogue for peace and friendship between the people of the Mediterranean basin.»

Concerning the visual identity of the 19th edition of the Games, the designers wanted to be “creative, realistic and connected”.

“With the shape, the colors and the identity, our logo joins its spirit with the philosophy of colors of the Mediterranean basin of which Wahran (Oran) is a flagship city”, Salim Iles explains. 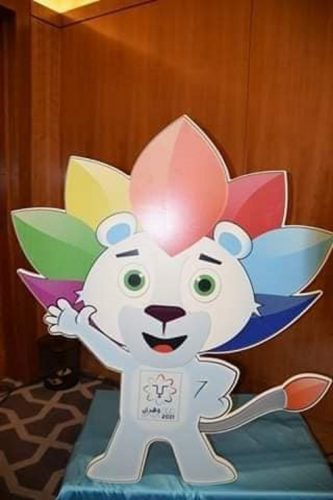