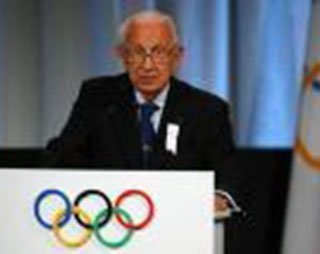 The Mediterranean sports family is very saddened by the decease of Juan Antonio Samaranch, IOC Honorary President and dear friend, who passed away on April 21st in Barcelona.

Born on July 17, 1920 in this city, he studied economics and business administration in his country, and then followed post-graduate studies in London and the United States.

He led an exceptional career as a diplomat and a sports leader and on July 16 1980 he was elected President of the IOC, a position that he occupied for 21 years, being the second-longest serving IOC President. Only Pierre de Coubertin led the movement for longer.

A brilliant visionary, he transformed and modernized throughout his course the Olympic Movement. Despite the two boycotts of the Moscow 1980 and Los Angeles 1984 Olympic Games, he reinforced the recognition of the I.O.C. and turned the Olympic Games into the exceptional event we know today.

He also provided the Olympic Movement with a solid economic basis which allowed it to grow and above all to disseminate its principles; also, thanks to the negotiation on the TV rights and the sponsoring and through the Olympic Solidarity, the National Olympic Committees around the world were able to profit from the redistribution of important funds and enlarge their field of action. He opened the doors of the IOC to women and created the Court of Arbitration for Sport. He was the architect of the extension of the IOC headquarters in Vidy and the founder of the Olympic Museum in Lausanne.

Juan Antonio Samaranch occupies a special place within the Mediterranean Sport, of which he was an ardent defender. He organized the 2nd edition of the Mediterranean Games in 1955 in Barcelona. He served, in addition, many years as Vice-President of the ICMG and in 2005 he received the Order of merit of the institution during the General Assembly in Almeria. He remained much attached to these Games and looked forward to the increase of their popularity.

In my capacity as President of the ICMG I wish to express my distress and my sympathy to the family of Juan Antonio Samaranch and to his friends of the International Olympic Committee.