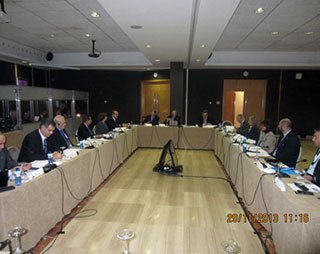 The first meeting of the ICMG Executive Committee for its new mandate 2013-2017 was held on 29 November 2013 in Tarragona host city of the next Mediterranean Games 2017. During the meeting and in accordance with the ICMG Charter, Mrs. Theresa Zabell (Spain) and Mrs. Nour El Houda Karfoul (Syria) were co-opted as the two female members of the EC. The various responsibilities regarding the monitoring of the preparation and the conduct of the Mediterranean Beach Games 2015 and of the Mediterranean Games 2017 were distributed to the members of the EC. In addition, the composition of the new ICMG Commissions for the period 2013-2015 was approved (Ethics Commission, Technical Commission, Medical & anti-doping Commission, Development & Cooperation Commission, Statutes & Regulations Commission, Disciplinary anti-doping Commission, Coordination Commission “Pescara 2015” and Coordination Commission “Tarragona 2017”). As the Call for Applications for the MBG 2019 and MG 2021 will be launched in December 2013 the Evaluation Commissions for the MBG 2019 and MG 2021 will be established in 2014. The idea of creating an Athletes’ Commission put forward during the 1st ICMG Olympia Seminar (2-6 September 2013, Olympia, Greece) was discussed and agreed upon by the EC members. Mr. Davide Tizzano, two times Olympic Champion (Rowing) and ICMG EC member, was decided to lead and organize this new Athletes´ Commission. In addition, the idea of organizing a Congress on the Mediterranean Games was also discussed and it was decided to establish an Ad hoc Commission to handle this issue in more detail before submitting the proposal to the ICMG General Assembly in 2015. Moreover, the President of the Technical Commission submitted to the approval of the EC members a proposal regarding a standard sports program to be implemented in the MG 2021 onwards. Finally, the General Coordinator of the OCMG “Mersin 2013”, Mr. Bekir Korkmaz, made a short presentation on the elaboration of the Final Report of the Games of Mersin which was approved by the EC members. The next EC meeting will be held in April 2014.

During the Joint Meeting with the OCMG “Tarragona 2017” it was decided that the date of the Games will be 30 June – 9 July and that a group of hotels located in the SALOU PORT AVENTURA will be used as Mediterranean Village. The General Director of the OCMG, Mr. Ramon Cuadrat, presented the Master Plan of the MG 2017 which was approved by the ICMG EC members.