In Cyprus the debriefing of the Mediterranean Beach Games “Patras 2019”

Bach: We have to be ambitious to reach gender equality

Τhe debriefing seminar of the 2nd Mediterranean Beach Games “Patras 2019” will be held in Cyprus, from 5 to 7 of March 2020.

The seminar will be organized by the Cyprus Olympic Committee in cooperation with the Commission for Cooperation and Development of the International Committee of Mediterranean Games.

This is a new project for the Mediterranean Beach Games and it was launched in 2018 right after the Games of Tarragona. The goal is to share an overview of the Games and transfer the knowledge to the cities that will organize the Games in the future.

The decision for the debriefing was taken in a meeting of the ICMG Secretary General Mr. Iakovos Filippousis and the President of the Olympic Committee of Cyprus, M. Dinos Michailidis. The two men discussed about the mediterranean sports movement in a very friendly atmosphere.

At the same time, the ICMG was represented by its Secretary General at the 2nd General Assembly of the European Olympic Academies, held in Nicosia on the subject: “Building the Future of Olympism”. 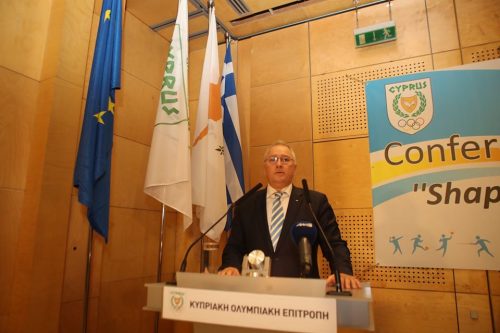 At the Opening Ceremony of the Session, Mr. Filippousis said among other things: “On behalf of the International Committee of Mediterranean Games and its President, Amar Addadi, I want to thank you for the honorable invitation to the mediterranean sports family to join the 2nd Annual Session of the European Olympic Academies.

For the countries of the Mediterranean basin, which is the cradle of sport and Olympism, the key priority is to commit and to act in the direction of the promotion and the dissemination of the Olympic ideals.

Μuch more in this tumultuous and turbulent corner of our planet where millions of young people are called to face serious social problems either in their own country or in the countries where they are forced to seek refuge in order to survive.

In this philosophy the National Olympic Academies and the International Olympic Academy, with their educational work, have a unique role and a historic mission, defending and promoting the Olympic values ​​and this unique way of life all over the planet. We strongly encourage and support your mission. ”

Τhe works of the General Assembly were attended by representatives of the 21 European Olympic Academies as well as executives of the Olympic Movement. The European Olympic Committees were represented by the President of the Hellenic Olympic Committee and IOC member Mr. Spyros Capralos, while the President of the International Olympic Academy, Mr Isidoros Kouvelos, made the keynote speech.