The Coordination Commission of the Mediterranean Beach Games “Pesaro 2023”

The scaled-down ceremony in Athens featured gold medallists, emotional addresses and a message of hope and unity, with the flame now set to travel to Japan. The Olympic flag was raised, and the national anthems of Japan and Greece sounded, as the Olympic flame handover ceremony took place at Athens’ iconic Panathenaic Stadium.

The event, which began in windy but sunny conditions, was significantly scaled down due to the coronavirus pandemic, and did not include the planned cultural ceremonies from Greece or Japan. But there was no lack of emotion, symbolism, or significance.

The Olympic Torch Relay through Greece preceding the handover was cut short due to the coronavirus pandemic, but two Greek priestesses entered the arena and watched on as Greek gymnastics Olympic champion Eleftherios Petrounias brought the flame into the stadium. He ran a lap of the historic track before handing the flame to Olympic pole vault champion Katerina Stefanidi to light the cauldron. 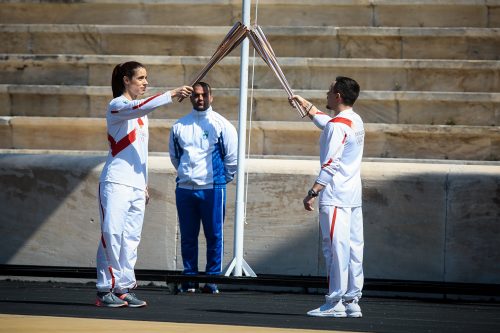 “We bid farewell to this great Olympic symbol, which brings together humanity, antiquity and modern times,” Capralos said. “I wish to believe that the journey of the Olympic flame in your country will offer joy and hope to the people of the whole world, who are currently in pain and challenged.”

Mr. Spyros Capralos handed the torch over to the Tokyo Organising committee represented by Naoko Imoto, who lit the lantern and left with it. Naoko Imoto is an Olympian who was part of Japan’s swimming team at the Olympic Games Atlanta 1996 and works as a UNICEF staff member, assisting in educational projects.