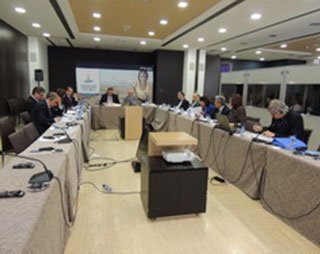 The last meeting of the ICMG Executive Committee took place in Tarragona on April 25.

In accordance with the Agenda:

1. The President of the Technical Commission submitted for consideration a proposal of a model sports program of the traditional MG from 2021 onwards

2. The President of the Medical & Anti-Doping Commission put forward a proposal of establishing a PCMA (Pre-Competition Medical Assessment) engagement with NOCs and organizing a Medical Symposium in 2017 which was approved by the EC

3. The President of the Development & Cooperation Commission presented the Scholarships for Athletes for 2014 and the Seminars to be organized within this year:

4. The President of the Coordination Commission “Pescara 2015” informed the members about the latest developments regarding the first edition of the Mediterranean Beach Games and the EC approved the Sports Program of the Games

5. Following the proposal of both the President and the Treasurer and as a symbolic gesture of solidarity, it was decided to allocate a small amount of money as a subsidy to the Mediterranean NOCs based on their participation in the MG

6. It was decided that the first meeting of the newly established Athletes’ Commission will be held in the following months

7. President Addadi announced the official candidature of the City of Oran for the MG 2021 and the public announcement of the candidature of Sfax through the media. Following his proposal, the EC approved the composition of the Evaluation Commission for the Mediterranean Games 2021

8. It was decided that the next EC meeting will be held on 28 November 2014 in Pescara.

Within the framework of the meeting the members visited some of the sports venues and had a guided tour of the City of Tarragona.

During the Joint Meeting both the President of the ICMG and his colleagues congratulated the OCMG and expressed their satisfaction for the progress of the works.