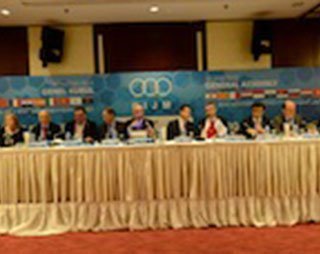 The ICMG General Assembly was held on the 19th of June in Mersin just before the Opening of the XVII Mediterranean Games. Representatives from 24 Mediterranean NOCs and IOC members participated in the GA.
During this meeting, the organization of the First Mediterranean Games was assigned to the Italian city of PESCARA against the French city of MARSEILLE with votes 38 against 31. This first edition of the Mediterranean Beach Games will be held from the 21st to the 30th of August 2015.
On this occasion, the new ICMG Executive Committee was elected for the period 2013-2015; the results of the elections were as follows:
– Amar ADDADI (Algeria), President
– Denis MASSEGLIA (France), First Vice-President
– Khaled ZEIN ELDIN (Egypt), Second Vice-President
– Isidoros KOUVELOS (Greece), Secretary General
– Kikis LAZARIDES (Cyprus), Treasurer
– Davide TIZZANO (Italy), Member
– Nese GUNDOGAN (Turkey), Member
– Fathi HACHICHA (Tunisia), Member
– Lino FARRUGIA SACCO (Malta), Member
– Stavri BELLO (Albania), Member
– Mustapha ZEKRI (Maroc), Member
– Marwan MAGHUR (Libya), Member