WADA Invites its Stakeholders to Say NO! to Doping

Election of Mr. Kouvelos to the Β.o.D of the Olympic Truce Foundation 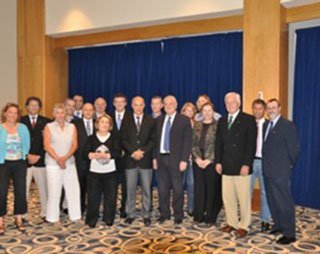 President Amar Addadi and Mr. Lino Farrugia Sacco attended the founding General Assembly of the Mediterranean Waterski and Wakeboard Confederation (MWWC), held on the 15th of May 2010 in Malta. On that occasion, the President reminded the big success of the Waterski competitions during the 2009 Pescara Mediterranean Games. A success that motivates the repeat of this experience during the next Mediterranean Games of 2013, and should above all inspire this new organization to increase its efforts to develop this sport in the countries of the Mediterranean basin, particularly in those of the southern coast.

Within the same framework, Presiden Addadi and Mr. Farrugia Sacco had the chance to meet Mr. Kuno Ritchard and Mrs. Depy Papadimitriou, President and Vice President respectively of the International Federation (IWWF), as well as Mr. Alain Amade, president of the Assosiation Europe/Africa. After having voted in its Statutes, the General Assembly of the Mediterranean Confederation (MWWC) elected its first Executive Committee, with Mr. Silvio Falcioni (Italy) as Chairman.