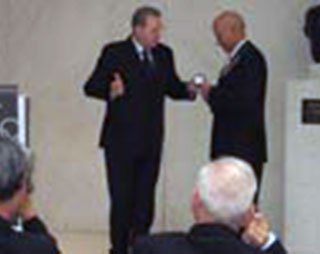 On Monday November 22, at the headquarters of the Ι.Ο.C., President Jacques Rogge awarded Mr. Amar Addadi, ICMG President with the “Olympic Order”. The ceremony took place in the presence of Mr. Hein Verbruggen, Sportaccord President accompanied by the members of his Executive Committee, among which Denis Oswald (ASOIF), Rene Fasel (AIOWF), Antonio Espinos (WKF), Jan Fransoo (IKFl), Ron Froehlich (IWGA)… Were also presents the Head of President’s Office, Christophe De Kepper, the IOC Director, Urs Lacotte, as well as the Director of the Olympic Solidarity and the Relations with the NOCs  Pere Miró accompanied by the Heads of his Department Pamela Vipond and Jérôme Poivey.